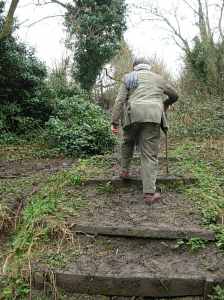 Cycling down to Withywood, I arrive at Anton’s house at 9.30. He invites me in whilst he finishes his muesli, and I have some time to look around before we go. The front room of the house is lined with books, many of them leather-bound, and every available surface is piled high with papers, files and magazines. At the far end of the room, a man bends over a drawing board, meticulously recording something from a huge volume in front of him. It looks like a scene from a medieval library. Anton introduces the man as his friend and helper, without whom domestic affairs would go out the window. He tells me that although his papers may look in disarray, he knows exactly where everything is, and most of it gets used. Anton is in his seventies, a slim man with a grey beard and a quick mind. He dons a flat-cap, flings a scarf about his neck and picks up his walking stick before ushering me out of the front door.

We catch the no.76 bus two stops down the road to Hartcliffe, another 1960s housing estate that merges seamlessly with Withywood (to an outsider at least: I have heard that in fact these areas are very tribal). Anton begins the walk with a tour of Hartcliffe centre, where a huge Morrisons and adjoining car part dominates a new shopping development. He explains how he was part of the steering committee that helped consult locals on this development, but he was disappointed with the lack of imagination that went into the final outcome. He gazes over the car park, and describes his vision for a pedestrian and child-friendly pathway and play area. We then turn around and look south, to where Hartcliffe abruptly ends, and the green of Dundry hill rises behind it. We walk up a wide stretch of grass between houses before climbing steeply up the muddy path that leads to the top of the hill. I am impressed with Anton’s fitness, he pauses occasionally for breath, but I slip more often than him. This stretch of grass is very littered, and Anton comments on it, but he says he thinks it’s the youngsters and he forgives them a lot, for at least they have a place like this to come and play. As we gain height, we stop to gaze back over the city. This is a most striking place, because the edge between the city and countryside is so sudden. From the top of Dundry ridge this is very apparent: looking North, the green slopes down until it meets the edge of Hartcliffe. Looking south, its very rural – green fields, hedgerows, farmland. Anton tells me he feels vibrations in this place of very ancient human habitation.

We follow the ridge a little way, through tangled woods, and muddy paths. There are many springs up here, and in several places the path is interrupted by a muddy trickle as a stream finds its way downhill. And then we come upon the ‘Malago Spring’: a spring which in fact flows into the Pigeonhouse stream, but was landscaped and made into a feature as part of a millennium project. It’s very pretty – a curved stone wall with clear water tumbling friskily out of a hole, then running over flat stones with (slightly illegible) lines of poetry carved into them. Anton tells me that this water is meant to have healing powers, and there’s an elderly lady in Withywood who swears that it heals the sores on her legs. He occasionally takes her a bottle of Malago Spring water, and she lifts her skirt to show him how much it helps! Anton takes off his glasses and splashes water from the spring into his eyes, and drinks a little. I also drink some, and find a discarded plastic bottle which I fill with spring water.

Walking back down the hill, Anton points out the lack of clear pathways on Dundry, and explains that in past years he came up here with clippers and cut back the brambles, but he no longer has the energy. It does have an air of neglect, and there’s no way I would have found the sprig without a guide, there’s no sign from Hartcliffe. Ramblers do walk on Dundry Hill, but apparently few local people use this green space that’s literally in their backyard. We catch a bus back to Anton’s house, and he shows me his beautiful illustrations and hand drawn maps of the area. He invites me to the Malago Society talk that evening and I decide to stay in Bristol for another night.